Small is the new big

Ray was born in Edmonton, Alberta. He moved with his parents to Vancouver at the age of ten. He began his career in Toronto, followed by Montreal where he met his wife Wendy who had just arrived from Dearborn, Michigan, looking for a job in advertising. Eventually, they started their own company in Montreal and Toronto. After two decades, they took extensive road trips throughout North America then settled in Oliver, B.C. Their house happened to have five plus acres of neglected vineyard. They took courses, attended seminars, hired a vineyard manager on weekends to teach, toiled in the vineyard, and eventually quality grapes were grown. When Ray had first viewed the property, he looked down from the house on the hill and saw a winery where there was only a frost pocket next to the highway. Six years later, vinAmité released its personal taste in wines. He continues to write privately, his first love since an early age and throughout his career. Like many of his contemporaries, Ray still has a love for the automobile in its many manifestations. 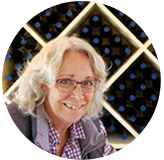 When Wendy came to Montreal for a holiday with girlfriends, she thought it was the closest she’d ever get to Italy or France. When she returned to Dearborn, she packed up her portfolio as a graphic artist and came knocking on doors looking for a job, one of which was Ray’s. They have been together ever since, living and working together, buying a house, starting a family, owning their own advertising agency and marketing consultancy, all more or less at the same time. After twenty years, it was time for change, exploring North America for a number of years then settling in Oliver in a house that had a boutique vineyard–and a steep learning curve. Once the plants were producing good grapes, vinAmité Cellars was born, all the time its mountain of paperwork and research managed in Wendy’s capable hands. Wendy also has a collection of cookbooks which she continues to grow, and is an avid reader of books and magazines. She loves food in all its manifestations, from the page to the plate. And she loves to feed people, the more the merrier! 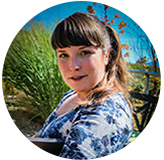 After some years in the Montreal fashion industry, Catherine chose a profession in the food industry. Her entry was through the art of food preparation with well-established high-end food caterers followed by full time duties in Google’s private kitchens. When her parents moved to Oliver, Catherine spent several summers helping out in the vineyard, learning the wine industry there. Before moving here, she took multiple wine courses in Montreal at SAQ. Since moving to Oliver, she has become an integral part of the wine industry, using her knowledge of wine and food, taking additional wine courses including pursuing WSET3 and multiple visits to wineries throughout the Valley to complement her vineyard knowledge and terroirs. Catherine was a key partner in the development of the tasting room, wine lounge and its systems, and is manager of the Tasting Room and Wine Lounge. Most importantly, she is Winemaker of our personal style and selection of our nine vinAmité wines and fortified wine. Catherine loves to cook for family and friends, filling the kitchen with music. She and the family has been known to dance in the kitchen at times since she was a little one. 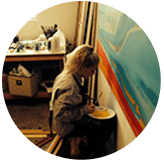 The thirst for travel led Nathalie to Southeast Asia from Montreal. She settled in Vancouver, a city she knew well and loved from her visits to her dad’s hometown.  Her successful enrollment in the Fine Arts program at Langara College led to early recognition from her teachers. She progressed to Emily Carr Institute of Art and Design and from there to her own studio where she worked, sold and accepted large-scale commissions on canvas. Now situated in Kelowna, Nathalie continues her passion. Her paintings hang in the vinAmité Wine Lounge as well as in galleries in BC, Alberta and Saskatchewan and actively engaged in commissions of large-format paintings. See her portfolio at nathaliedenise.com. On the wine side, she has taken WSET courses, and, since her past visits, has continued her avid interest in the vineyard’s management. She works hand in hand with her sister and parents in every aspect of vinAmité’s interests, including food pairings. Her love of family, new friends, painting, wine, food and as a horsewoman since she was a little girl, continues to evolve and grow. Nathalie was also recently married in our vineyard. Another new asset for the Valley!